In the lead up to QPASTT’s establishment in 1995, there had been a growing momentum for a national program to support survivors of torture and trauma.  Research had demonstrated that there were long term impacts of unmet mental health issues as a result of trauma from a refugee experience. In response, a range of specialised services had been established in Sydney, Melbourne, Adelaide, Canberra and Perth.

In Queensland, in 1991, the Brisbane Women’s Health Centre initiated a broad consultation with refugee background communities. This was in response to a group of Latin-American women’s expressions of concern about areas in which their needs as refugee survivors of torture & trauma were not being met. Following this, the Brisbane Refugee Torture and Trauma Research and Support Project was created under the auspice of the Brisbane Women’s Health Centre early in 1992. A small amount of funds were obtained from the Consumer Health Forum of Australia and a research and support project was undertaken with four language groups in Brisbane – Spanish speaking, Farsi speaking, Vietnamese speaking and Khmer speaking.

The primary aim of the project was to provide a mechanism so that survivors from these communities could themselves express their needs in relation to recovery and resettlement. A central element of the research methodology was the emotional support provided to the research participants. A clear picture was formed about the needs of refugee survivors of torture and trauma. A report documenting the findings was produced.

The vast majority of people consulted welcomed the acknowledgment and the opportunity to talk about their needs. The four communities responded in very different ways to the questionnaire and the responses were analysed and discussed within the context of the specific culture to be properly understood, particularly in relation to service provision in Brisbane.

The needs and the expectations of how those needs would best be met were culturally determined, therefore any service aimed at providing support and assistance to torture and trauma survivors had to be flexible and adaptable in it is approach and response, had to maintain open communication, and had to be prepared to provide very practical assistance in the areas of social, welfare, and educational assistance, as well as counselling, medical and a range of therapeutic assistance, and community development. The outcomes of this report formed the blueprint for the establishment of QPASTT.

ln December 1994, the Federal government established the national funding program PASTT (Program of Assistance to Survivors of Torture and Trauma) and  asked the Brisbane Refugee Torture & Trauma Research and Support Group to establish a new community based service for survivors of torture and trauma in Queensland.  QPASTT opened its doors in 1995, auspiced by the Brisbane Migrant Resource Centre.  Paula Peterson, Sheenah Turnbull and Desi Castillo were the first employees.  Rita Prasad-Ildes, convenor of the Brisbane Refugee Torture and Trauma Research and Support Group, was succeeded by George Belfrage, as the first Chairperson of QPASTT.

Following incorporation Dr Ian Mannion became the Chair of QPASTT and was followed by Professor Keithia Wilson in 2005, who is still the current Chair.  Within a month of starting, QPASTT funding was doubled by Queensland Health and another two workers joined the team.  Three years later in 1998, under the Integrated Humanitarian Settlement Service (IHSS), four more workers were employed and QPASTT has continued to expand since that time.

Tracy Worrall became the new Director in 2007 and soon after through a partnership with the Multicultural Development Association (MDA) and Brisbane City Council, the Brisbane Multicultural centre was built. QPASTT and MDA now co–locate there at 28 Dibley St, Woolloongabba.

Since 1995, QPASTT has grown from small staff numbers, to now more than 60 people. The expansion of the humanitarian program to 20,000 in 2013, along with the number of asylum seekers currently in Queensland has led to an increase in demand for services along with an increase in the level and complexity of client presentations. In 2011, QPASTT created a state wide presence, through offering services in offices co-located with other organisations in regional Queensland including Toowoomba, Rockhampton, Townsville and Cairns.

In facing these challenges, the organisation has had to be flexible and adaptable as it strives to meet changes. 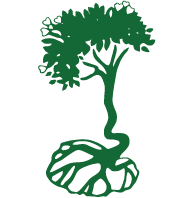 The QPASTT logo portrays the recovery process from torture and trauma:
The rock on which the tree is growing represents the hardship survivors have experienced, both before and sometimes after migration.
The tree represents the process of regrowth for the individual, families and communities. This is initially very painful but often culminates with flowering again in a new environment.
The branches of the tree are reaching out and re-connecting with others, which in turn, if there is a positive response, feeds the tree’s growth.